Traffic Signs and Their Meanings 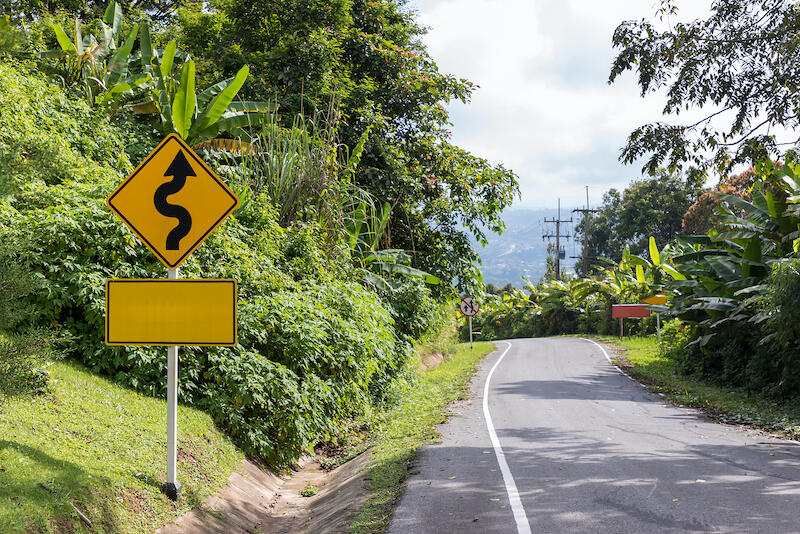 The Federal Highway Administration (FHWA) is the government agency that’s responsible for the rules and regulations that govern our roads. As of 2018 , there were over 273 million cars, trucks, busses, and motorcycles registered in the U.S.

With that many vehicles on the road, it’s critically important to have standardized road signage that’s easy for motorists to see and understand.

This is why the FHWA created the Manual on Uniform Traffic Control Devices (MUTCD). It spells out the exact specifications and standards for road signs throughout the U.S. The manual breaks down road signs into seven main categories :

Read on to learn more about traffic signs and their meanings, what categories they fall into, and the common places you can find them.

A warning sign warns motorists of upcoming hazards, speed changes, or lane merges. They help save lives by giving the driver of the car ample time and opportunity to read the sign, digest the information, and react accordingly.

Left Turn Ahead – This sign is yellow and has a diamond shape. The arrow on it indicates left. It’s most often found anywhere the road curves to the left and allows drivers enough time to lower their speed accordingly.

Winding Road Ahead – It features a diamond shape and is yellow in color. It has a curved arrow pointing upwards, indicating that the upcoming road has curves, and drivers should exercise caution while lowering their speed.

Hill With Grade – This sign features a black silhouette of a truck traveling down the side of a black isosceles triangle. It’s yellow and shows the grade percentage. This sign is beneficial for truckers who need to be made aware of an upcoming hill.

Truck Escape Ramp – You’ll often see a “Truck Escape Ramp” sign on the same stretch of road as a “Hill With Grade.” The sign is rectangular in shape, yellow, and informs trucks and passenger car drivers of an emergency stop ramp on steep downgrades.

Stop Ahead – A diamond-shaped yellow sign that features a red octagon stop sign and black arrow on top that indicates a stop up ahead. You can find this sign on stretches of road where there is limited visibility due to curves or other geographical features.

On average, there are around 1,800 car-train related accidents that occur every year. Railroad and light transit rail signs can help improve safety in and around railroad crossings.

No Train Horn – A yellow rectangle with a black border and the words “NO TRAIN HORN” indicate that trains are not required to sound their horn at the crossing.

Do Not Pass – This sign consists of a vertical rectangular shape with a black commuter train on the tracks and a nearby pedestrian on a white background. It indicates you should not pass in front of a stopped train.

Workers Ahead – An orange diamond with a black stick figure using a shovel warns motorists that workers are working close to the road.

End Road Work – This sign consists of an orange rectangle with the words “END ROAD WORK” in black. It lets drivers know that they are safely out of the construction zone.

Detour – A black sign with an orange arrow pointing right and the words “DETOUR” inform vehicles that a detour is ahead.

These types of signs are more directional than informational. Often referred to as traffic control signages, they inform motorists of traffic laws specific to any given geographical area.

Some common examples of regulatory signs include:

Stop Sign – One of the most ubiquitous signs on the road, this octagon-shaped red sign with the words “STOP” is found anywhere the law requires vehicles to come to a complete stop.

Yield Sign – An inverted red triangle with a smaller inverted white triangle with the words “YIELD” in red informs drivers to yield. This sign is found wherever traffic safety requires vehicles to yield.

Do Not Enter – This sign has a white background with a red circle, and the words “DO NOT ENTER” in the center with a white rectangle separator above the word “ENTER.” It’s most often found in places where vehicle traffic comes from the opposite direction, such as freeway exits and one-way alleys.

Highways and freeways are where you can find most guide signs. They indicate which road you’re on, provide exit, and directional information such as shopping areas and scenic byway markers.

Interstate – The shape of this sign is a cutout shield. The route numbers are in white letters over a blue background. You can find them along interstate routes.

Destination Distance – This sign is a long green rectangle with white lettering indicating the next city’s distance, exits, or interchange. They’re strategically placed to inform drivers of how close they are to these areas.

National Forest Route Marker – Brown in color with a trapezoidal shape, these signs have white lettering to indicate which forest route you’re on.

Commonly found along highways and freeways, these signs inform motorists of upcoming services and recreational areas.

Some common examples include:

Lodging – A square blue sign with a stick figure of a human being lying on the bed in white informs motorists of upcoming lodging options.

Rest Area – This sign features a dark blue rectangle with the words “REST AREA” and an indicating arrow in white. It’s most often found on long stretches of road where driver fatigue can occur.

Gas – The gas sign is square and has a dark blue colored background with a white gas pump. You can find them on roads where there are long distances between gas stations.

These signs provide safety instructions to pedestrians and bicycles. They help keep them safe in areas where they come near traveling vehicles.

Some common examples include:

No Pedestrians – A white square sign with a black border and red circle with another red line crossing over a walking stick figure pedestrian informs people to not walk in a specific area.

Bicycle Parking – This sign is rectangular in height and features a green border, bicycle, and the words “PARKING” with an arrow indicating direction. You can find them in areas where there is high bicycle traffic.

Playground Ahead – A lime-green diamond with a black silhouette of two children on a see-saw indicates that a playground is coming up.

We hope that this guide has provided you with valuable information on the various types of road signs that exist. However, this is just a small sample of the many signs out there on America’s roads and highways.

If you would like to learn more about our MUTCD compliant traffic safety equipment and signs, click the button below.